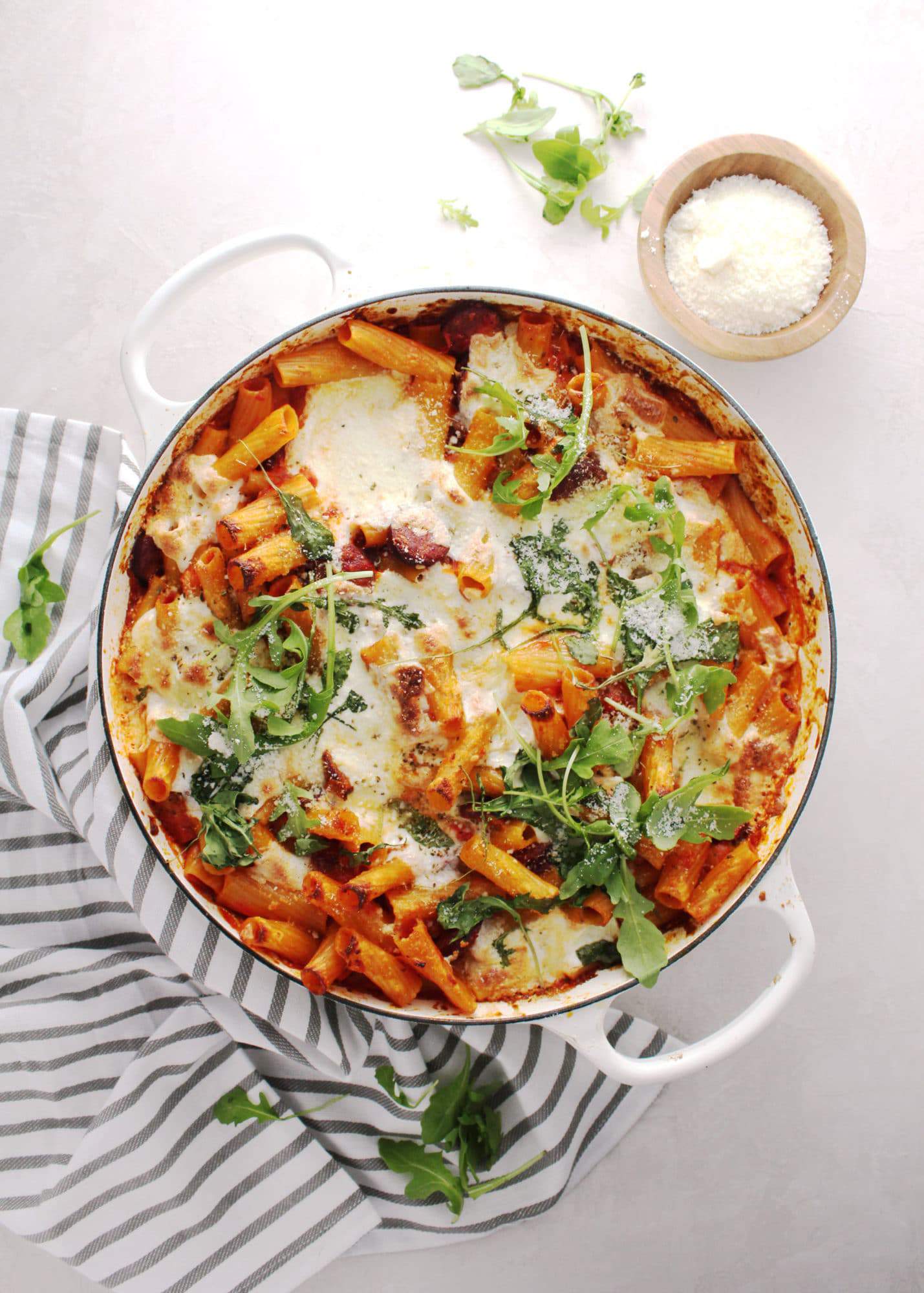 Lately, I’ve been dreaming of roasted red peppers, hazards of operating a food blog, and so I thought “if you don’t follow your dreams, what are you following?” Amiright…? Somehow the topic of roasted red peppers has actually come up in several recent conversations I’ve had with friends, again food blogging hazards, and not only have I been craving them, but I’ve known I needed to incorporate them somehow into a recipe and SOON!

Q: The big question was how? 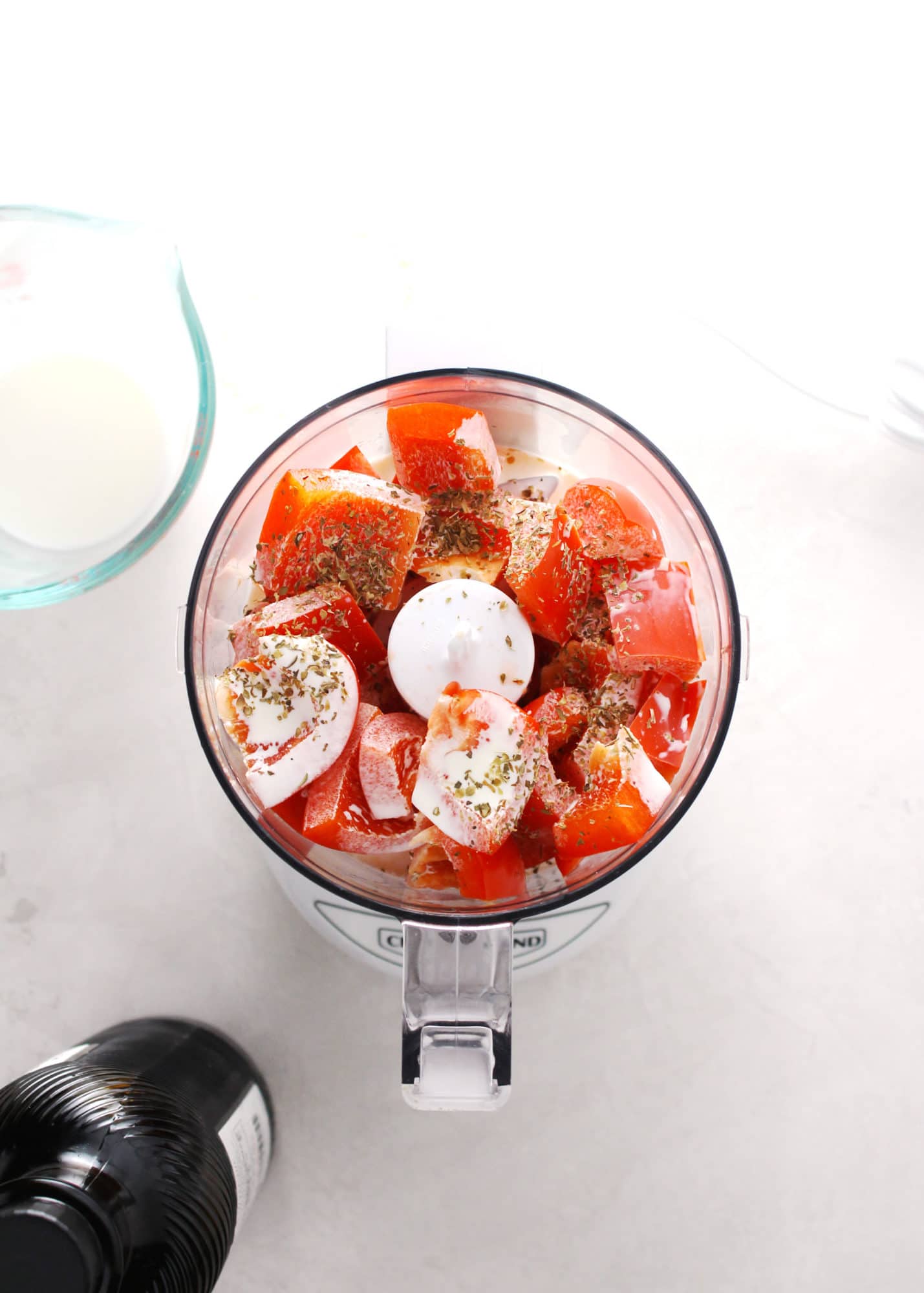 This pasta is not for those afraid of a good calorie or two and one that should be an indulgence you take seriously because this dish is seriously good. With rigatoni swimming in a creamy roasted red pepper sauce and melted cheesy goodness baked in, you’re going to think twice about putting your spoon down and pushing your plate away. Don’t say I didn’t warn you.

Another fact, this sauce is on point and should be used on basically e-v-e-r-y-t-h-i-n-g. Really, you could just make the sauce and boil up some noodles and call it a day, or dinner, cause it’s that good (or maybe that’s all the time you have), but maybe you want more substance and that’s where this baked rigatoni comes into play cause there’s the obvious cheese you see happily melted everywhere, but there’s also some sausage hanging out in there too. This is substance at it’s best my friend. 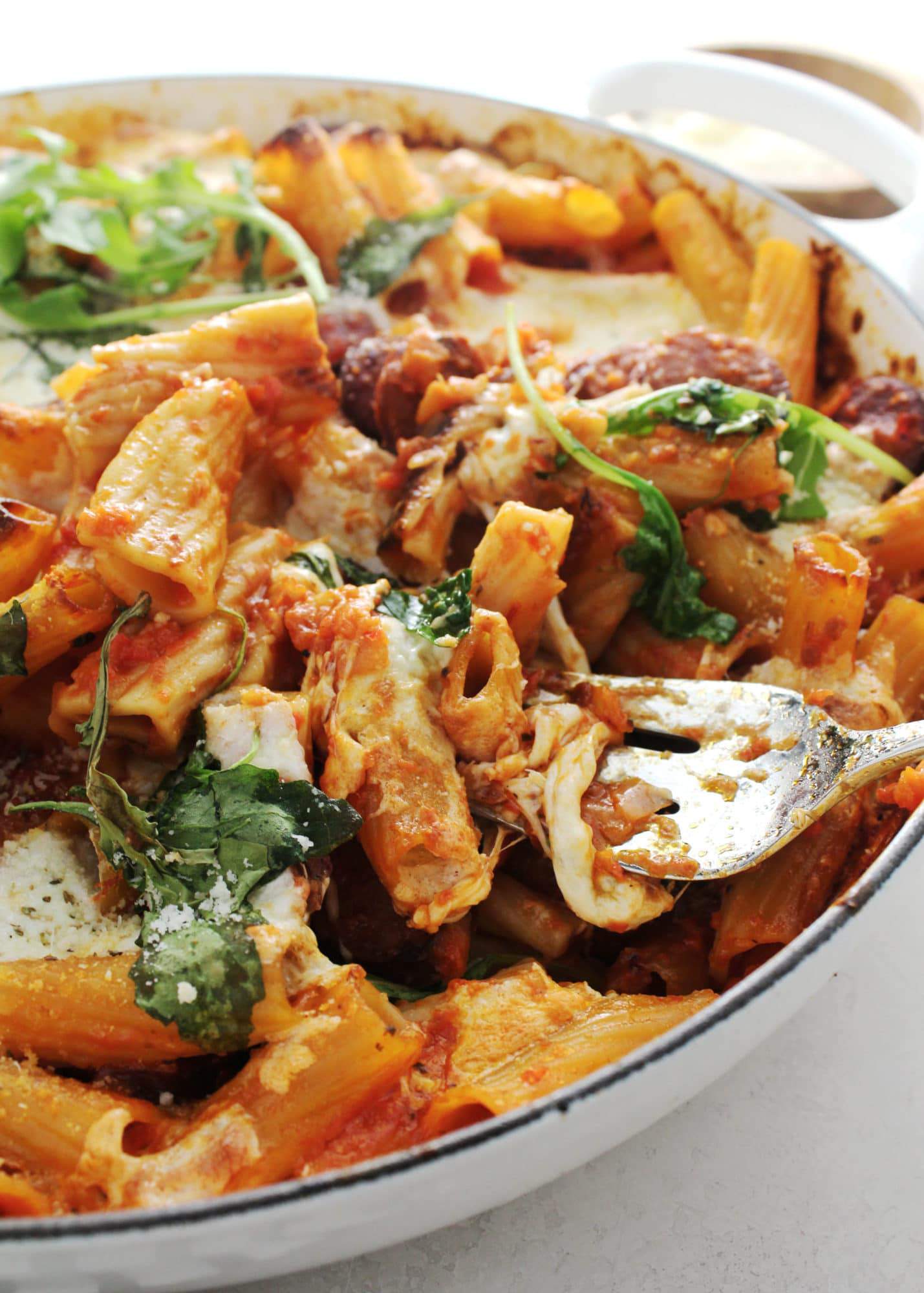 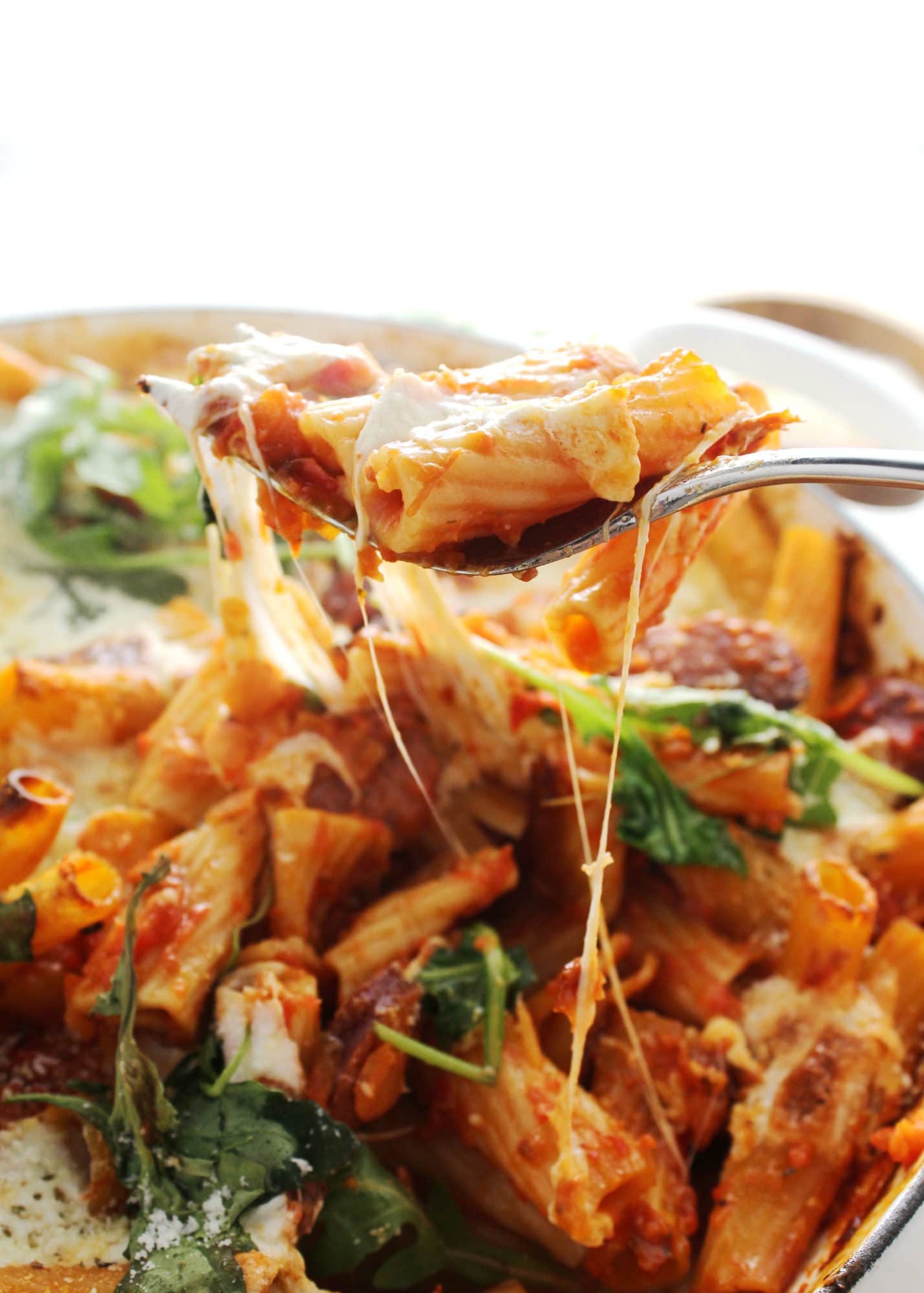 This recipe isn’t too fussy, meaning it doesn’t require a ton of effort and part of the brilliance is that you don’t have to cook the noodles prior. Hello, time saver! 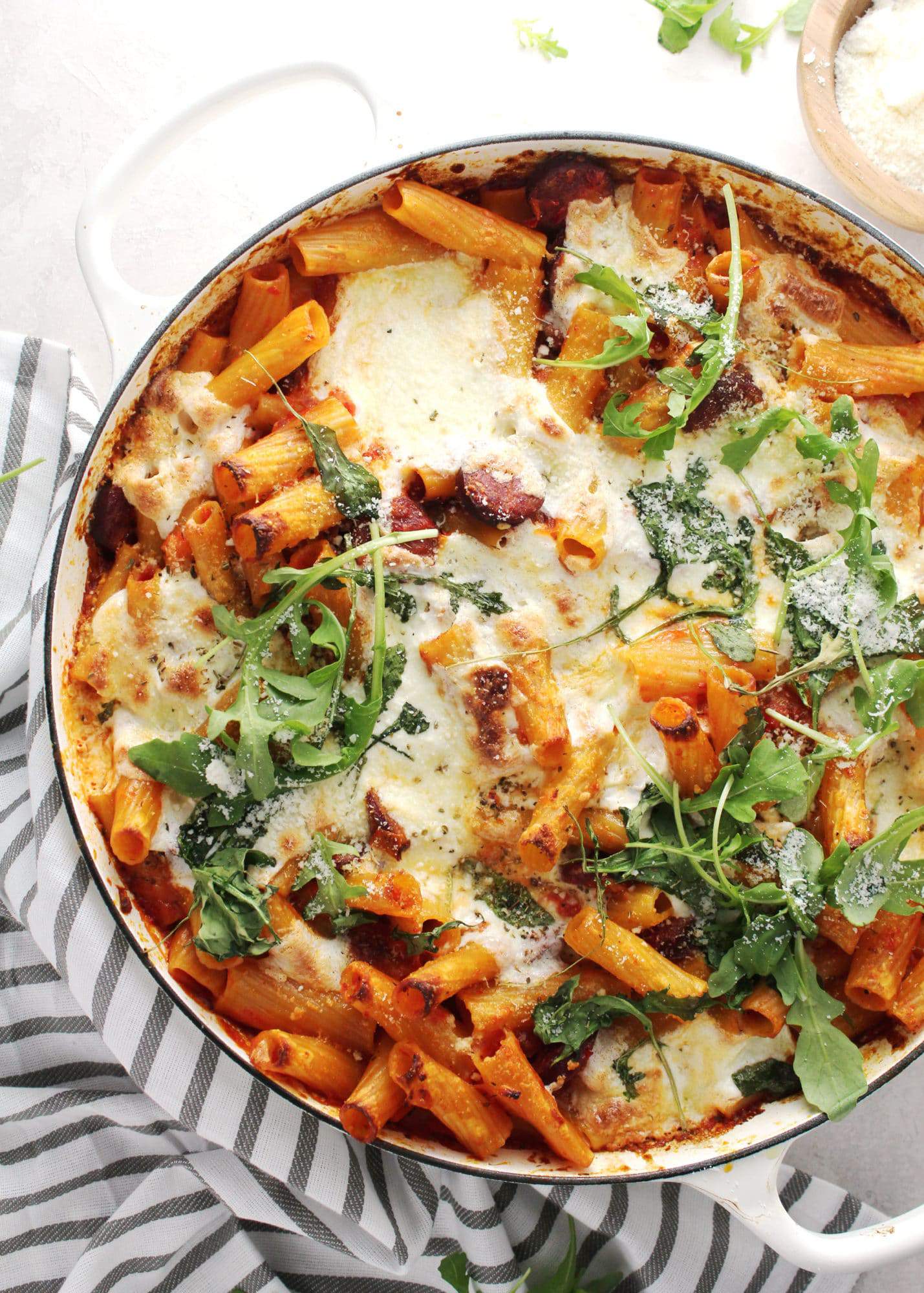 This Roasted Red Pepper Baked Rigatoni is a one pot meal and requires no pre-cooking the pasta. It’s super cheesy with a red pepper cream sauce and sausage mixed in.

My favorite skillet to use, and also the one shown is the “buffet” skillet from Le Creuset.