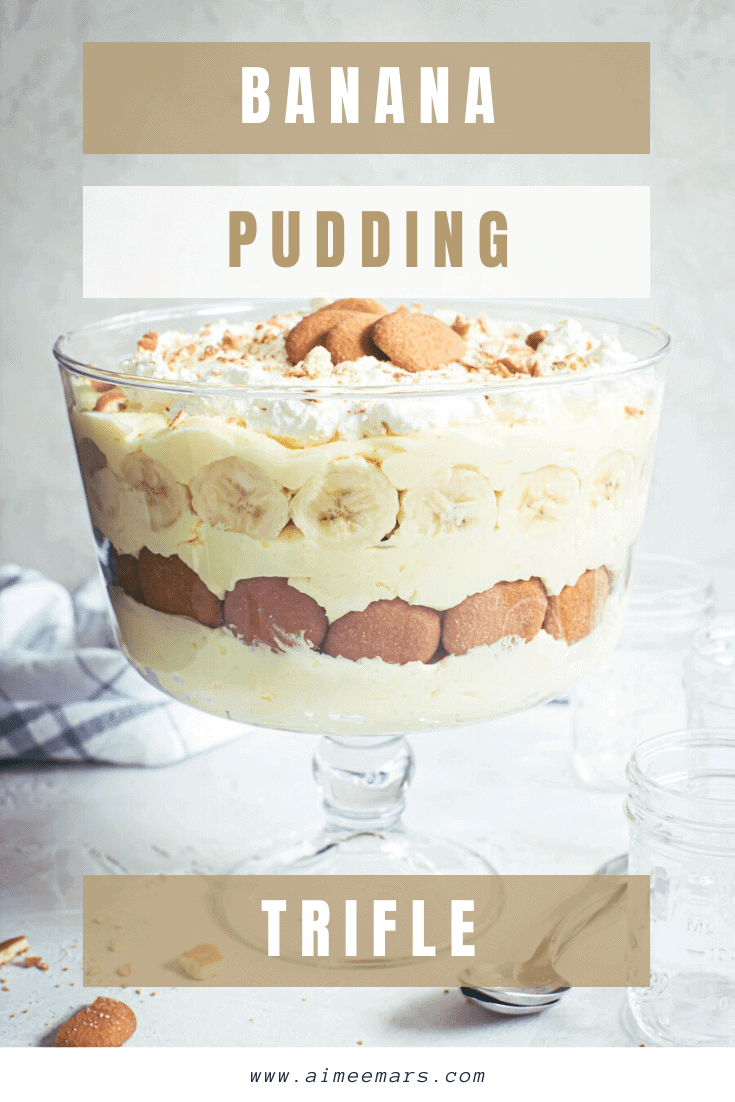 This simple southern dish is a showstopper dessert perfect for picnics or gatherings. With layers of bananas, mixed in with pudding topped with homemade whipped cream and vanilla wafers, this Banana Pudding Trifle is a must-make dessert.

I don’t think I could even consider myself southern if I didn’t have a recipe for banana pudding. While I have several, which I promise to get posted soon, this one is a more modern quick version perfect for picnics and entertaining.

This banana pudding trifle is a rich and creamy dessert with layers of fluffy pudding and crunchy wafer cookies. Topped with a sweetened homemade whipped cream this dessert is a showstopper.

This modern version of banana pudding can be prepared easily and quickly and makes a large amount. It’s perfect for sharing.

Why is Banana Pudding considered southern?

How banana pudding originated is slightly hazy, however, considering it a southern delicacy isn’t. Similar to ambrosia, banana pudding started to show up around the 19th century when exotic ingredients such as mandarin oranges, coconut, and of course bananas became more readily available as well as affordable.

There are some similarities between English trifle and banana pudding and chefs began to place the still exotic fruit into fancier dishes such as this custard-style dessert.

The earlier pudding recipes used more authentic, and what we now refer to as “clean” ingredients. Later, when pudding mixes and ingredients such as Cool Whip were introduced the recipes began to take on a life of their own and became more widespread.

Here’s a quote from Serious Eats on how it started to become more of a Southern icon:

As the Jell-O ad indicates, somewhere along the way banana pudding became closely associated with the American South. That seems to have happened just after World War II. During the early 20th century, hundreds upon hundreds of banana pudding recipes were published in newspapers all over the country, and the dessert wasn’t portrayed as Southern in any way.

For a more in-depth history, you can read the exact article here.

How to Make Banana Pudding Trifle

Most of the ingredients in this delicious and decadent banana pudding are the easy-to-prepare quick-cooking or packaged kind. There are no secret or obscure ingredients and some of them are interchangeable, which I’ll discuss below.

Making this trifle is extremely easy and so is assembling it. You can place the layers however you prefer, especially if you’re using additional add-ins.

Can You Make Banana Pudding Ahead?

Yes. In fact, I recommend making this dish the day before you plan on serving it because of the time it takes to set. Don’t make it more than 2 days before though because the bananas will then begin to lose moisture and potentially turn brown.

Do I have to use a trifle dish?

Not at all! Trifles are a showstopping dessert that seduces you with its many sweetened layers, however, using an actual trifle dish isn’t necessary. Any clear glass baking dish or standard baking dish will work just as well.

Absolutely! Since this recipe makes a substantial amount of banana pudding you can just as easily scoop out the layers into clear glass jars for individual servings.

How to store banana pudding trifle

If you have a large enough refrigerator you can cover the top of your trifle with plastic wrap and store it for up to 4 days. You could also transfer your trifle, though it won’t be as pretty later, into an air-tight container and keep it in the refrigerator as well.

How long does banana pudding keep?

It will last up to 4 days kept in the refrigerator if kept in an air-tight container. Any longer and the wafers become very mushy.

Can you freeze banana pudding?

Yes! Banana pudding freezes best when it’s fresh. Before using the bananas, slice them and then dip them into a bowl of lemon juice. This helps keep them from turning brown while it freezes.

Make the pudding according to the recipe and instead of layering it in your trifle dish place it in a freezer-safe container. Cover the container with plastic wrap before placing the lid on top. 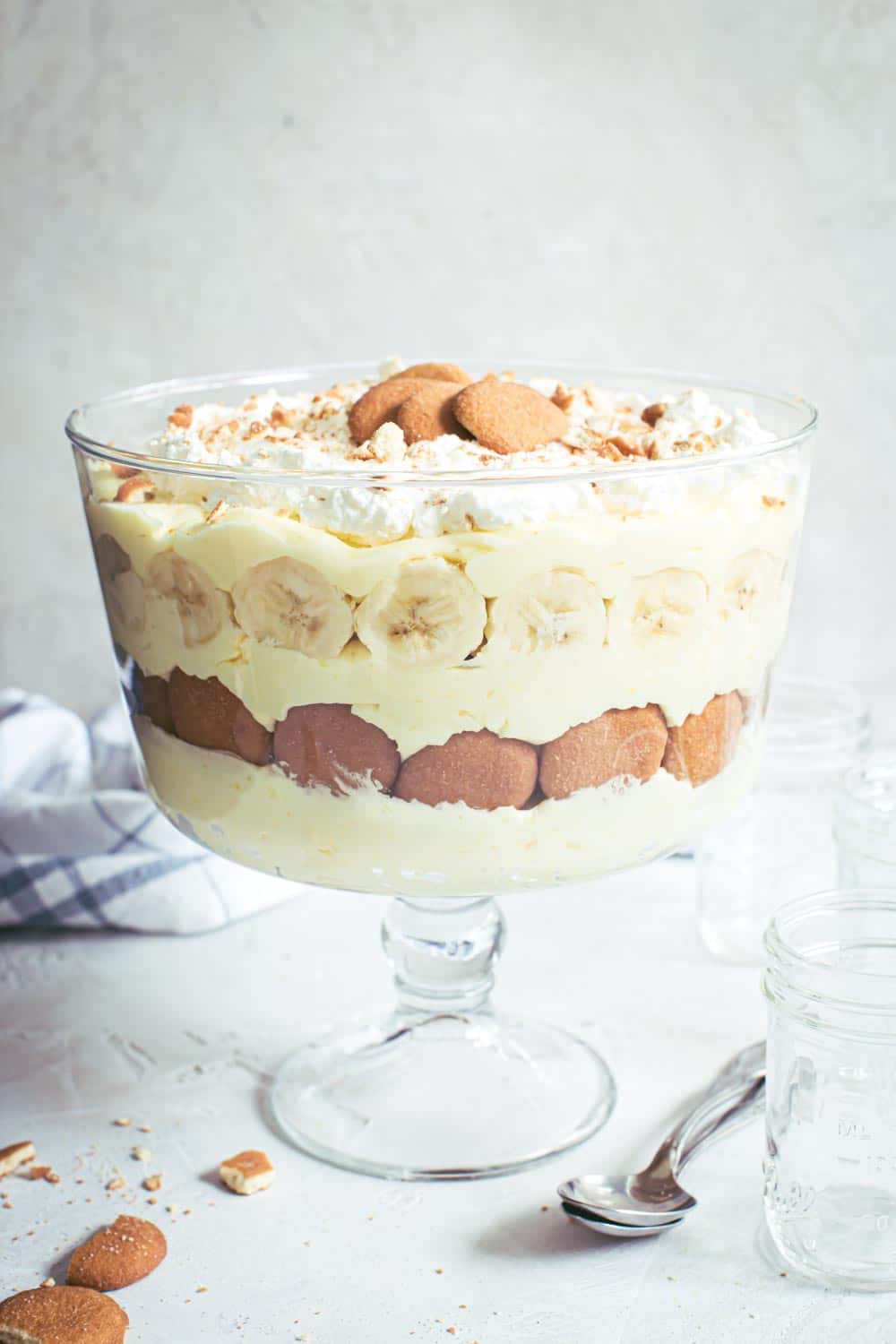 To get the layered look with the wafers and bananas standing up you will need an extra banana or two and potentially more vanilla wafers depending on how large your trifle dish is. To store: cover with plastic wrap or transfer to an air-tight container and keep in the refrigerator for up to 4 days. The bananas will begin to brown after about 48 hours, but the dessert is still just as delicious.