Indulge in this classic pumpkin bread or a batch of these soft pumpkin cookies to elevate your sweet fall pumpkin-infused foods even more.

Crisp fall weekend mornings are made for a steaming cup of coffee and a decadently delicious seasonal breakfast. Pumpkin everything is dancing through my mind and I can’t seem to indulge my tastebuds enough with the nutmeg, ginger, clove, and cinnamon spices.

Big weekend breakfasts are also dreamy, and though we don’t consume them often, I try to squeeze in a few when we get a lazy morning.

Pumpkin spice waffles pair so perfectly with this shift in the year where life tends to speed up with festivities but also opens up for a little more time spent with those we love.

Though I’m a purist when it comes to waffle and pancake toppings, there’s something divine about slathering these in warmed butter and whipped cream.

Not just any whip cream. A cinnamon almond homemade whipped cream is absolutely necessary. To make this divine topping follow the steps below:

How to Make Fluffy Waffles

The trick to achieving a springy soft waffle is in the eggs. By separating the eggs and adding the yolks to the initial mixture, and then beating the whites until stiff and fluffy, which you fold in at the end, you get fluffy waffles. Though this is an extra step it’s one I highly encourage because the outcome is so wonderful. 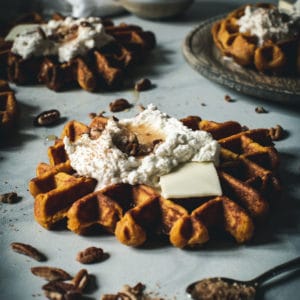 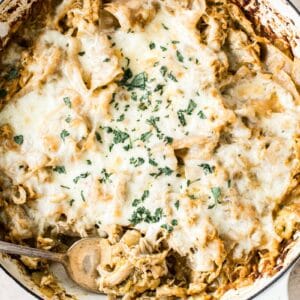